It wasn't grim, but it was certainly cold for the Bolton Abbey Ultra, organised by It's Grim Up North Running.  Martin and I arrived at Bolton Abbey to freezing conditions for an 8am start.

There was a marathon starting at the same time but we had carelessly entered the ultra - four laps up and down the valley to make 33 miles in all.  It was a small field with only 12 in the ultra and 41 in the marathon, but a nice atmosphere as we set off immediately uphill.  Why do I always enter riverside races thinking they will be flat?  This one kicked up and down a lot, no long or big climbs but plenty of short, steep sections to break up your stride.

We settled into a nice relaxed pace with plenty of runners still in sight.  The loop was a figure of eight: two miles up the valley, cross Barden Bridge and along the other side of the river, back past the start and a couple of miles down the valley.  Fortunately we didn't have to cross the stepping stones as a few had been washed away in the recent floods, instead using the sturdy bridge alongside.

The first lap passed quickly in 1:25 and the paths were quiet at this time of day.  We knew what to expect now - 3 more laps, with the last lap being a little shorter.  Lap 2 was much the same in 1:30 and lap 3 in 1:35.  I was feeling the effort on the third lap, with sore feet and wanting to sleep.  We both wished we had entered just the marathon as we started the fourth lap!

Despite the cold, it was a beautiful course, alternating between long views across the valley and twisty paths enclosed by trees.  I was glad to have worn road shoes, given it was mostly on hard paths, with only a few miles on grass and a bit of mud.  It never really warmed up, maybe getting to 4-5 degrees with a little sun.

I was feeling strong for the finish but waited for Martin.  We had no idea of our position but chased someone down in the final few hundred metres and were surprised to finish in 2nd and 3rd!  Outrageously they gave Martin 2nd despite me reaching the finish just ahead of him. 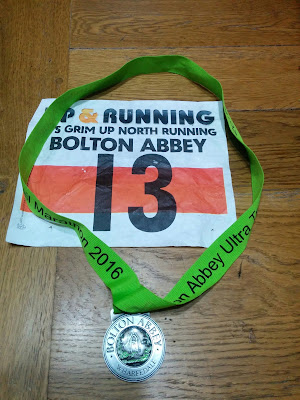 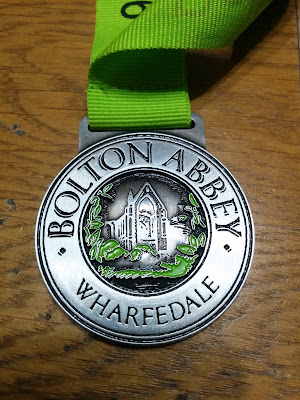 The goody bag had a lovely note attached, and a bottle of beer and water and chocolate bars inside.