I only discovered the Stort30 yesterday afternoon, but was feeling in need of a long run and, having run a Challenge Running marathon earlier this year, knew it would be well organised.

No navigation required here - two laps of the cricket pitch to spread us out, then a kilometre on pavement before hitting the towpath and following the River Stort for 15 miles.  Turn around and run back, with just the one lap of the field to finish.  Easy!
It was a cold but bright and still morning, good running weather.  After a quick start I soon settled into a steady pace.  The towpath was a mix of sticky and slippy mud, and hard packed trail, with some tarmac sections thrown in.  I was glad I'd worn road shoes but they were a bit slippy on some of the mud.  First checkpoint at 9.5km and second at 16km went by quickly, then I settled into a group of four to halfway.  Big mistake here as I ran just a little too fast to stay in this group.

I enjoyed seeing the leaders fly past, the first one 2.5km before the turnaround.  The group disintegrated at the halfway checkpoint.  I set off first but the effort immediately hit me and I knew I'd pay for the last 6km for all of the second half.  Two of the group soon passed me.  The second half of the race went quickly and I just kept focussed on keeping going.  Around 6km from the end cramp was setting in to my calves, forcing me to ease off to a brisk walk at times and to stretch when it got too bad.

The cramp worsened and four or five runners passed me in the last couple of kilometres where the cramp was now affecting my hamstrings and quads.  I ended up with the top of my left foot very sore and just about shuffled uphill for the last kilometre on road and then around the field.  Very frustrating!

Despite the cramp, a hugely enjoyable run along a scenic riverside course to finish in 4:27:20. 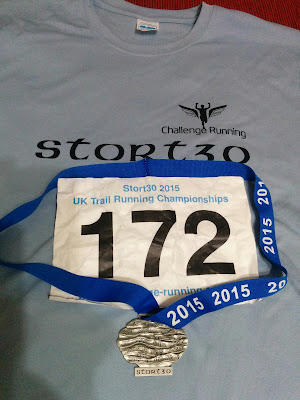 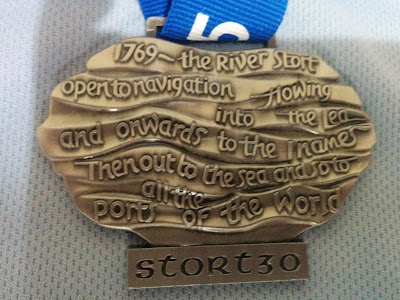 That is 88 marathons done now.  The 100 feels well within reach.