A lovely sunny run along a disused railway today.

It was back to the Discovery Centre at Great Notley Country Park, where I had been last weekend with Claire and Arthur.  This is a wonderful place for toddlers to play.

I soon settled in to 10th place out of 50 starters.  There was a group right in front of me that I'd like to have run with, and could have, but they were just a few seconds per kilometre faster than my target pace so I held back.  I maintained 5 minutes per kilometre for the first half, despite the hills and the heat from the sun.  The hills were a surprise given I was running along a disused railway!

The leader passed me only about 2km from the turnaround.  Still 10th at halfway I didn't expect to catch anyone else now as everyone had settled into a steady pace.  I waved at the outbound runners as I returned.  It didn't seem long before all 50 had passed, maybe 8km, and I was on my own again.  My heart rate had been nice and low for the first hour, but was now hovering around 165 and I couldn't seem to budge it, even if I slowed down.

This section was tough.  My legs were tired, the sun was out and the long, long hills were sapping at my energy.  I relaxed on the downhills and just kept steady jogging on the uphills.  Back under the A120 at Great Dunmow and a short walk on an uphill I was running again and passed one of the early leaders at about 33km.  He was walking as I flew past into 9th.  At the final water station I was surprised to pass the halfway leader who was injured.  8th.  The lead woman was in sight up ahead for a long time and she must have got lost as she appeared behind me and then passed me.

35km to 37km was all uphill and this was starting to break me.  All I could do was keep a slow, steady pace.  After that it was much flatter to the finish and my motivation increased again as I passed another runner reduced to a walk.  7th.  Past the busy cafe on the old railway platform and just a little further on the Flitch Way, then the turn off with 1.3km to go back to the park.  I passed another guy reduced to walking, leaving me in 6th, then realised the lead woman had disappeared.  She had got lost again and I was now in 5th.

Before the start I had joked to Claire that the organiser would make us run up the hill at the finish line to the bird monument on top.  No joke as that's exactly what he did.  We had to touch the monument to finish, after staggering up the hill hands on knees. 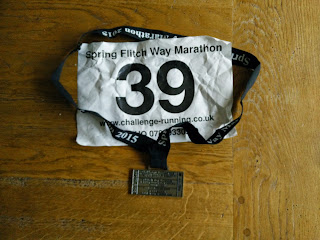 That was a thoroughly enjoyable race today.  I love these niche marathons on scenic trails.  Good support at the water stations and from a handful of others on the route.  And a nice t-shirt and medal at the finish.  I felt good today, despite the heat, finishing in 3:39:58.  I suspect the 10km league race on Wednesday night had left some fatigue in my legs and that I could have gone faster without it.  Now it really is time for a rest - no marathons next weekend and time to focus on Race To The Stones training.

Here is the route on Strava.