The Christian Aid Walk is a sponsored walk which is also open to runners.  Marathon distance of course, and this has to be one of my all time favourite marathons.

Given the range of walking and running speeds, walkers could set off from 8am and I set off last at 10am, at the same time as the course sweeper.  All the other runners had set off early.  The first few miles from Ware were kind of strange - I was running on my own, yet had marshals to direct me at every junction!  I recognised Chapmore End from the Fairlands Valley Challenge, but this route was otherwise new territory for me.  The solo run continued for about an hour until I eventually caught up with some walkers.

I passed through checkpoint one at High Cross, stopping only long enough to have my route card stamped and refill my bottle.  My pace was slower than recent weeks, but I was happy enough with that.  This marathon was just meant to be a nice run in the country.  And it certainly turned out to be that.

The sun was in and out, it was cool to mild - good running conditions, but with a bit of a headwind in the second half.  Checkpoint two at Standon arrived quickly.  Again I didn't hang about, and had was now passing many walkers and a few runners.  Section three to Widford was equally pleasant, passing through lovely bluebell woods and alongside  the River Ash.  There were fewer walkers about now and only the odd runner.  After Widford I caught up with a runner who had set off at 9:30am and we ran together - he didn't seem too keen on navigating himself and we were about the same pace.  From around the 30km point the marshals were only just getting into position and the signs being put out, and soon after there were no marshals at all!

I had been feeling good all the way round and, after a 1:56 first half, was very keen to finish in under 4 hours, which didn't feel like too much of an effort at this stage.  Navigation was straightforward on the way to the final checkpoint at Stanstead Abbotts.  The checkpoint was barely open when we arrived but we got our cards signed anyway.  I didn't want to hang about now, and didn't bother refilling my bottle for the last 5km along the River Lee towpath.  I left the other runner behind and sped up to be sure my sub-4 was safe.  The towpath was nice enough, but I was now focused on maintaining a quick pace with tired legs.  No sign of cramp this week which had plagued me in the last three road marathons.

Through Ware and back onto the towpath for the final short section, which seemed to go on forever.  Still, a it was a good job that I had picked up the pace because I finished in 3:58:15, my fourth sub-4 marathon in four weeks.  I was also the first to arrive at the finish!

This was an exceptionally well supported event.  I was just a bit quick for the marshals in the later stages, but that wasn't a problem at all.  I'd recommend this marathon to anyway for the support and the scenic course which turned out to be reasonably flat for a trail marathon, with just the slightest of gently rolling hills. 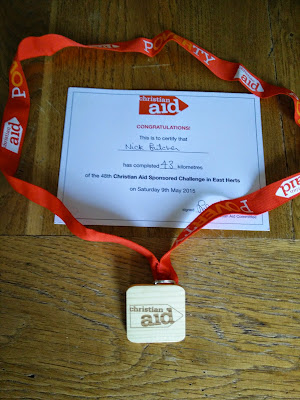 Here is the route on Strava of my 81st marathon: