I first ran the Sandwell Six Towns Marathon in 2010, their first year of putting on the event, where I was the first runner back (from an admittedly small field!)  This year I managed to finish fifth, helped by a few runners who were ahead getting lost on the route.

This marathon mainly follows canals and country parks around the six towns of the borough of Sandwell.  Apart from one hill in the middle, the route is unsurprisingly flat!  The directions were mostly easy to follow (how can you go wrong with "follow the canal for 4.5km"?)  But there were a few tricky sections where I wasn't sure if I was going the right way or not for a while.

I set off too fast, paying for it with sore calves for much of the rest of the run.  It started out cold, but warmed up steadily throughout the run.  I was guzzling water + GU electrolyte from my camelbak and somehow finished reasonably well hydrated.

There aren't many races through tunnels and this one surely has the longest, taking in the 1.75 mile long Netherton Tunnel.  At 8.2 metres wide, there is just enough space for the canal and a narrow towpath with a lot of puddles.  It is a weird sensation to run through, as you soon start to feel disorientated, even running with a torch. 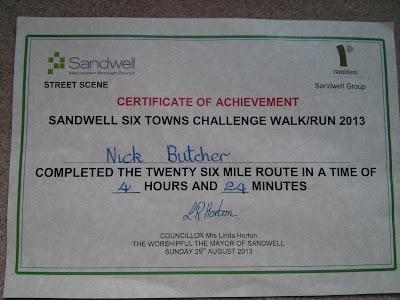 I was disappointed to finish the Sandwell marathon four minutes slower than last time, in 4:24, although as it was raining last time it was probably a bit cooler.  Not a great time for me for a trail marathon, especially for such a flat course.

That was marathon 53 for me.  I'd definitely recommend it - especially at only £6.  No cake at the checkpoints on this one, just biscuits, sweets and crisps, but all manned by very welcoming Staffordshire Ramblers.  I felt hungry all the way round, constantly nibbling at peanuts and sultanas.  And because the run is part of the Sandwell Town Show, which doesn't start until later, absolutely no queues for the plentiful toilets!  You can't say that about many races.

I can't say I feel like repeating the double with the Pathfinder marathon right now, as I did in 2010, but hopefully after a decent meal and sleep I will.