Today I had a picnic, the Trionium Picnic, also known as the hardest marathon in Britain.

Arriving at the bottom of the Burfoot slope, an intimidating grassy incline that ascends to the top of Box Hill, there were plenty of other runners and already a buzz in the air.  It was clear that there was something special about this race.  Certainly the most interesting race start I can remember - first a call by the organiser asking for anyone who hadn't run a marathon before to raise their hand.  The half dozen or so brave souls got a laugh and a round of applause.  Next we sang the national anthem.  Well the first verse anyway, after that it got a bit patchy.  Then the organiser told us that as this was a special Olympic year he had added on about 3 extra miles to the usual marathon distance and could whoever had a GPS watch let him know afterwards how long the course actually was!  Well it was just over 30 miles with 7,100 feet of ascent and descent.

We set off up the Burfoot slope, around a marshall and straight back down to the bottom of the famous Zig Zag Road, where we ran up on a lovely tarmac surface (it has recently been resurfaced in preparation for the Olympic road cycling in July).  This was an easy gradient to ascend on and with the runners yet to spread out, a good opportunity to chat and pick up information on the course.  Just before the cafe at the start we turned off tarmac for the last time, the rest of the route being on trails and grass, now heading downhill towards the long, long flight of stairs down to the stepping stones.  I don't think any two of those steps are the same size and it required plenty of concentration to run down quickly without slipping.  At the bottom we crossed the River Mole by footbridge and then back across on the stepping stones, fortunately well above the water level today.  The first drinks station was here and then it was straight back up the stairs.  I had been feeling great to this point but the stairs drove home just how hard this race was going to be, and I would be running down and back up these steps four times in total. 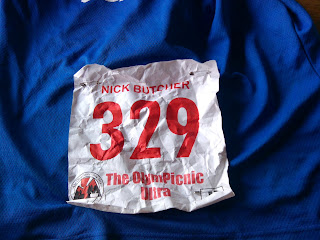 At the top there was a confusing, short loop up to the trig point for more water and then down a very narrow track, before hill number 3, a long, tough ascent on slippery chalk, before crossing the road, more drinks and into the woods for a long very gentle descent through the trees.  This opened up onto a long, grassy downhill, where there were already plenty of runners coming back up the hill.  This was another run to the bottom, round a cone and straight back up hill, followed by an easy incline back into the woods and then a long downhill through Juniper Bottom.  I enjoyed this downhill but this was going to turn into the worst climb for me on the way back - the longest climb and it gradually steepened towards the top.

More water at the bottom.  I was dissolving small chunks of Gu electrolyte tablet in about half my drinks and this made a big difference to getting enough water down and feeling good most of the way round.  Then onto 190 steps straight up (yes I counted them to take my mind of my wobbly legs).  Yet more ascent after the steps, but on a nice winding path through the woods before opening out onto a flattish grassy section, before the last descent, with more slippery chalk, and lots of people on their way back up, to reach the turnaround point.

The Picnic is run over an out and back course and when you get back to the start you turn around and do it all again. You can see the profile although that is for the standard marathon, not including the extra four miles this year.

I felt good at the turn around, not wasting any time at the water stations and was now focused on ensuring I returned to the start/finish in less than 3 hours 30 minutes, the cut off time for getting to "half way" (actually 16 miles out of 30, because the Zig Zag Road was only included on the first lap).  This leg went well and I was enjoying myself, taking care to land lightly on the descents and to keep a quick pace on the ascents, but controlling my heart rate to avoid exhaustion.  I saw Claire and Emma and James spectating at the top - good to have some support, but no time to stop for a chat.  After a second go at the stepping stones steps, it was a kilometre run down the Burfoot slope to the finish line in 3:13, turning round without stopping and walking back up the slope.  There had been an option to drop out at half way and still get a medal and I wanted to get away from the finish as quickly as possible so as not to consider that option.

Back to the top of the slope and I couldn't believe I was already on the stepping stones for the third time, flying across the seventeen stones and back up the hill.  I had been feeling good on the way back in and still feeling good now I was overtaking well with hardly anyone passing me.  I was dead on the climbs though and there would be no running uphill from now on.  As long as I could keep a quick walking pace up I was fine.  Nobody else was running up the hills at this point.  The second leg out took 1 hour 45 minutes and I remember suffering on the hills, but feeling greats on the downhills and the rare flat sections (there really was only one flat section on the entire route).  At the final turnaround I was still passing people and feeling strong. I enjoyed the first ascent of the final leg, got cramp in the flat section and had to stop to stretch it out a few times.  Down the long, steep steps quickly and then had someone to chat with to take my mind off Juniper Bottom.  I kept thinking I was about to reach the top, then turned another bend and had to keep going.

Now it was downhill for the fourth time down the long, long grassy slope and straight back up again.  I was so glad to see the back of that one, kept a good pace uphill through the woods, grabbed some water with the last of my electrolyte from the smiling marshals at the top.  All the marshals were superb on this race, smiling, encouraging and quick with the drinks.  I had a few jelly babies on the route and one Gu gel but didn't feel hungry otherwise.  Having a decent fry up three hours before the start must have done the trick.

From here I flew down the long chalky slope and then back up the narrow path.  Much easier this time as the first time back the half marathoners (who started two hours later) were all on their way out.  Now it was very quiet, although I could still usually see a runner ahead and behind at most times.  Back to the trig point at the top for more water as by now I was feeling an unquenchable thirst.  I saw Claire here again, then quickly down for the final descent to the stepping stones, feeling great flying across them for the nineteenth and final ascent of the race.  This time the steps didn't trouble me.  OK, I was walking but I felt good.  One kilometre to go from the top and I was really enjoying myself here, running strongly.  Claire grabbed some photos at the top of the Burfoot slope before trying to keep up with me.  I had to hold back a little as I could feel the cramp ready to buckle my legs at any minute, but as I sped up down the slope I passed a couple of runners to finish strong in 6 hours and 40 minutes.

Here is the route on Strava - all 30.4 miles and 7,000 feet of ascent and descent!  That was my 39th marathon.  I'm still feeling good 24 hours later.  No muscle soreness today and walking is fine.  Just a little tired.  I'd love to have another go at this route after putting in some hill training to get a faster time.


A big thanks to Rob, the organiser, and all the marshals on the course.