Claire and I drove up to Barrow, near Bury St Edmunds for the Great Barrow Challenge.  It is billed as a marathon, although it is 26.7 miles, and I could have done without that extra half mile at the end!

Being a small event I got to set off at the front!  It was a fast start, downhill on road for a mile, and I soon settled into a small group of three of us, chatting as we ran.  I was running with a woman in her first marathon and a man who was training for John O'Groats to Lands End (or possibly the other way around).

It was a mixed course, switching between muddy trails and tarmac and I had a good eleven miles chatting until we hit a tough section - about 3 miles in a straight line across heathland, initially uphill then flattening out.  I got dropped on this section and found it pretty boring.  At about 14 miles I caught up with a couple of the other runners again, but I was perhaps pushing the pace just a little too much and by 18 miles I was struggling.  The few runners around me soon disappeared into the distance and I battled on, now with the dry, cool weather turning to demoralising rain.

The last eight miles or so dragged on, with me gradually ticking off the miles, first on my own through another long, straight off road section, then a couple of boring, wet road miles.  Most of the last six miles were uphill, save for one steep downhill, and the final stretch into the finish was quite unpleasant.  I was glad to finish this one - a good 18 miles, but a bad last 8.  My legs and hips didn't hurt, but stiffened up, making running uncomfortable.

Not the best checkpoints on this run.  I had to wait for the marshal to get the water out of the boot of his car at one checkpoint!  I know they are all volunteers so I don't like to complain, but still not what you need when running. 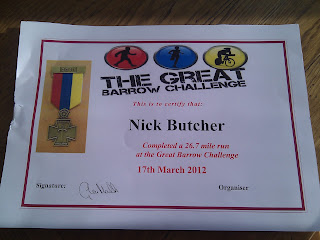 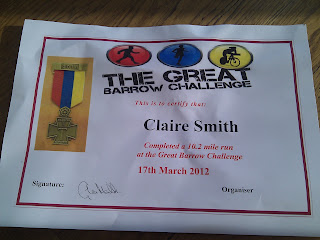 Here's the route on Strava.  A plus point of this one is that the route is marked with permanent "right of way" style signs and was easy to follow without the directions.  That was marathon #35, completed in about 4h18m.  Claire ran the 10 mile route, partly on the same course, but with a cut across between the in and out trail of the marathon.

The organisers run a four in four days on four different courses later in the year.  Maybe...
Posted by NickB at 21:05