Running in Auckland: a Sri Chinmoy half marathon

After ten long months, I finally got a chance to race again today.  The world famous Sri Chinmoy races are alive and well in Auckland and I had the pleasure of a half marathon in the Auckland Domain.

It wasn't a fast time for me, at 1:49:13, but then I haven't been running much of late.  The course consisted of a 2.5km figure of eight lap around the Auckland Domain, starting with a gentle incline up past the War Memorial and museum, a 180 degree turn around a cone then an equally gentle downhill back past the centre of the eight and then past the Wintergarden and back to the finish at the cricket pavillion.

The lap length allows a 5km, 10km and (usually) 20km to be run simultaneously.  Today they had extended the 20km to half marathon (21.1km) by getting us to start in the wrong direction, run approx 550 metres, around a cone and then back through the start line.  There were about 25 runners in the half and I settled quickly into tenth place, only passing or being passed a couple of times on the run.

I ran in Vibram Five Fingers shoes, which limited my speed - it hurts to land anything other than softly in these shoes!  Nice to see one other runner wearing the same shoes, the Vibrams are getting a little visibility around the world.  I managed to keep good form for 16 kilometres and after that I was starting to land a little heavy, especially on the downhills.  A couple of sections of the course had a strong headwind, fortunately short lived and I could usually tuck in behind someone. 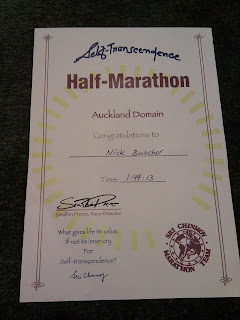 It was a small field and after the 5km and 10km runners had finished, even more so.  I did battle with a couple of other runners, eventually having to let one go but keeping just ahead of another.  I followed one for the last couple of laps but just couldn't quite catch her.  Its always helps to have a target in front to try and pass.

A great race, the last one in the series I think and a big thankyou to the organisers for an excellent, low key event.  And for the porridge at the finish line - a first for me after a race!
Posted by NickB at 09:23